One week to go 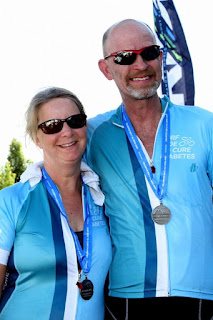 Our bikes were shipped out last week and we are leaving Tuesday. We want to get out a few days early so that we can start to get acclimated to the elevation. According to the science types, at one mile in elevation there is 50% less oxygen than at sea level. That takes some getting used to. Hopefully it won't negatively impact our ride next Saturday. My plan is to ride the full century (100 miles) and Mary is planning on the metric century (100 kilometers).

Thank you to everyone who has donated to our ride this year. Mary and I have to raise $5,000 each. As I write this she is about $400 short of our goal and I'm about $700 short. If you'd like to help close the gap we'd greatly appreciate it. Donate to Mary here and donate to Tom here. Thanks again for helping fund the search for a cure to Type 1 diabetes.
Posted by Tom Scheidel at 4:00 PM No comments:

Yesterday was our last team ride of the year. The Santa Fe ride, on the first weekend of November, is the last of six JDRF ride events for 2018. So except for the 22 of us riding in Santa Fe, the rest of the team has completed their respective destination JDRF rides. Also, our bikes leave on Thursday, so the season is just about done.

We had a great fall day for the last ride. Sunny skies, light wind, and temperatures in the mid-50's. There were two loops of 30 and 40 miles. Mary did the 30 mile loop and I did the 40. We all started from the Taylor's house near Ada and rode north to Wabasis Lake. We returned thru Cannonsburg. One of the roads we were on was Honeycreek. Anyone who lives in this area knows how hilly that road is. We will be riding a lot of hills in Santa Fe, so it was good to ride a lot of hills on our team ride.

Santa Fe will be the 14th consecutive year that Mary and I have participated in a JDRF ride. Because of the elevation (7,000 feet above sea level) and all the climbing (6,000 feet) this could be the toughest ride we've ever done. I feel pretty good, but I'm concerned about how my body is going to deal with the elevation. This is higher than either Lake Tahoe or Loveland, Colorado. Plus it's probably going to be cold at the start and I don't really like cold weather. But my goal is 100 miles and I will do everything I can to achieve it.

Thanks to everyone who has donated so far. You can still donate by clicking on this link.
Posted by Tom Scheidel at 10:29 PM No comments:

Great Night for a Ride

Mary and I just got back from a little 20 mile ride on the White Pine Trail. We rode north up to Russel Road and then back. The trees along the trail are turning golden and some light rain earlier in the day put a shiny slick on the pavement and the already fallen leaves. There were many cyclists out on the trail tonight - more than I've seen on that stretch in a long time. Everyone probably wanted to get out an enjoy the 80 degree temps and relatively non-rainy conditions.

I also did a 20 mile ride on Saturday, going south on the WPT and then thru Riverside Park before heading back almost along the same route. Last Thursday I was on the northbound leg of the WPT again, riding to 15 Mile Road before turning around. A 22 mile round trip. That gives 62 miles in the last five days and 1,096 for the year, so far.

We leave for our ride in Santa Fe three weeks from tomorrow. Mary and I are going out a couple of days early to get acclimated to the altitude (7,199 feet above sea level) and do a little hiking. The ride takes place on November 3 and I'm getting close to my $5,000 goal. If you'd like to make a donation to help find a cure for Type 1 diabetes, please follow this link.

26 days until we ride in Santa Fe.
Posted by Tom Scheidel at 7:57 PM No comments: