Hope, Han, and a Red Cup

The cryptic title of this post will be explained at the end, see if you can figure it out before then. I got out to ride three times this week. On Sunday I took the White Pine Trail south and rode through the west side of Grand Rapids to the start of Kent Trails. I then rode that to Millennium Park. The park is in the midst of a major expansion. They are adding another pavilion, more parking and a few more miles of paved trails. I rode some of the new trails and ended up riding all the way along the outside of the park. On the way back north I rode the trail that goes through the former Butterworth dump. The area is very clean now, but there are no buildings and the path/road is a bit overgrown. It was a bit like a scene from a post-apocalyptic movie. I then rode through downtown Grand Rapids before hooking back up with the WPT and heading home. I also posted one of my best speeds of the year. 17.6 MPH for 36 miles.

On Wednesday I went out to ride some hills. I started by heading up Post Drive. There are two nice loops I can do by starting this way. One turns east on House and follows 131 north. Lots of twists and turns and dips on that route. I went west on 9 Mile this time and did a 23 mile loop that went north on Division, back east on 13 Mile, and then south on the WPT to home. 13 Mile has a couple of pretty significant climbs. A little over 800 feet of climbing on that route.

This morning I got out for a quick 14 miles before the tornado blew in. (Yes, we had a tornado touch down near Grand Rapids this afternoon.) I did one of my favorite quick loops. I rode past Rockford High School, out to Kies Road and past Luton Park, then south on Myers Lake Rd, west on 9 Mile and finish by going down 7 Mile hill. I hit 41 MPH on that downhill today. That ride gave me 73 miles for this week and 695 miles for the year.

So did you figure out the title of this post yet? All three of my rides this week were solo rides. Hope Solo is the goalie of the US National Women's Soccer Team. Han Solo is from Star Wars. The Red Cups we all use at parties are made by the Solo company.

Posted by Tom Scheidel at 6:25 PM No comments:

The One Day Ride Across Michigan: ODRAM is a major cycle event that benefits JDRF. ODRAM took place this past Saturday with riders starting in Montague and traveling 150 miles to Bay City. I've been on the organizing team for this event since 2010 but I've never done the ride. It's very difficult to work an event and also be a participant. Saturday was a pretty crappy day to ride. It started with monsoon like rains. These stopped for a while and then were replaced with light sprinkles. Then the sun came out and then the monsoons came back. This continued from 7:00 in the morning until 8:00 in the evening. We had almost 400 riders registered but only about 300 braved the conditions and rode. Even though it was a tough day most of the riders finished with big smiles and boundless enthusiasm.
Since I didn't get to ride Saturday I was very motivated to get out on Sunday. I took the White Pine Trail south toward Grand Rapids and then followed the marked city streets over to the start of Kent Trails on the west side of the city. From there I made my way to some brand new trails in Millennium Park. I rode around the entire park. There were lots of kayaks, paddleboards, and swimmers out on the lake on a perfect summer Sunday afternoon. I was keeping up a pretty good pace on my ride. When I got home I had logged 36 miles at an average speed of 17.6 MPH. That might be my best speed ever on a solo ride.

Because of our work and travel schedule this summer Mary and I haven't made it to a lot of the JDRF team rides. Yesterday we were able to join the team for a very hilly ride in the Ada/Rockford area. We started with 16 of us doing a 25 mile loop that went east on Knapp Street near Forest Hills Eastern High School. It's a significant climb in the first mile of the ride. That was how the whole day would shake out. Climbing, then descending, a little bit of flat (emphasis on the little), and then we'd climb again. The loop took us north on Parnell Road and past St. Patrick's Church (where we attend) just as Mass was letting out. A bit of pedestrian and traffic dodging and, after a short easterly jog, we were headed north on Gavin Lake Road. We turned west on Belding Road, a busy street but with a w-i-d-e shoulder. Then it was south on Ramsdell Road going through the village of Cannonsburg and continuing south on Honey Creek Road. Lots and lots of hills on that 25 mile loop.

About eight more people joined us for the second half of the ride. We again started up Knapp Street, but this time we reversed the direction of the loop, going north on Honey Creek Road. The funny thing is there were just as many hills going in the other direction. A small group of us decided to do a 30 mile loop for the second time out which gave me 55 miles for the day. Mary opted for a second 25 mile loop and finished with 50 miles, her longest ride of the year so far. 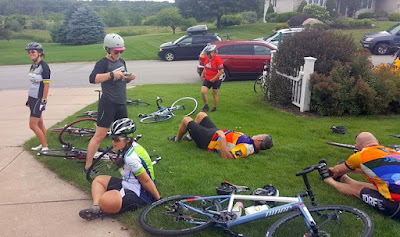 Some people did two loops, some only did one. The photo above is after the first loop people got back and before we went out for the second loop. The people who are standing are the ones who only rode the second loop. The people sitting or laying down had already done the first very hilly loop and were preparing themselves for the second. How hilly was it? Approximately 2,900 feet of elevation gain in 55 miles.

Posted by Tom Scheidel at 3:59 PM No comments: