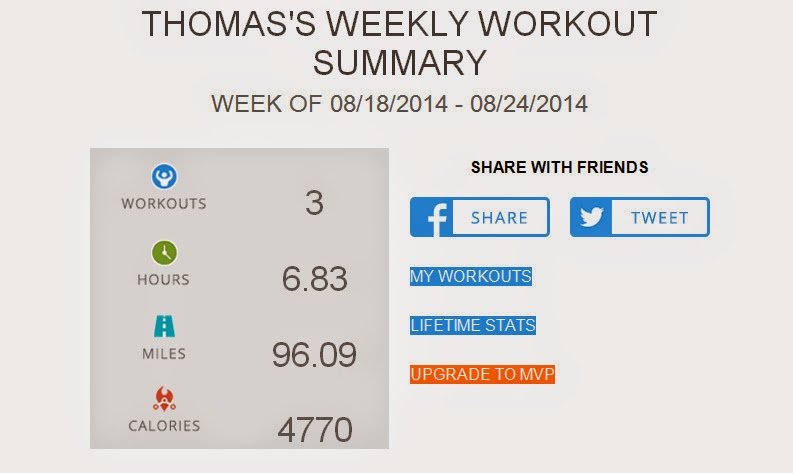 On Sunday we had a team ride out near Barlow Lake, which is in northern Barry County. It was 49 very hilly miles, featuring 1,700 feet of climbing. It was a gorgeous route past farm fields and small lakes. It wasn't especially hot and we did have some cloud cover in the morning, but it was very humid. We started with a 30 mile loop that had most of the climbing. We returned back to our host's (Thanks Paul and Kami) cottage and then the hard core group went out for 19 more miles. When we finished we had a cookout and swam in the lake. It was a great end to a beautiful day.

The Death Valley Ride is only 53 days away. If you haven't made a donation yet, please consider doing so now. Thanks.

Posted by Tom Scheidel at 2:26 PM No comments:

We have been participating in the JDRF Ride to Cure Diabetes for ten years. When we started our son Jake, who was diagnosed with Type 1 at age 6, was only 13 years old. He's now 23, lives in Chicago and has a great life despite his disease. Since 2005 we've logged thousands of miles and raised thousands of dollars to help find a cure for Type 1 diabetes. Sometimes with all the riding, fundraising, and advocating we can lose sight of the main reason we are doing all this. Then a gentle reminder shows up.

As part of our fundraising we send out donation request letters. Yesterday we received a donation from a woman who has contributed before. She included a short note.

Dear Mary, Tom and Ian,
Continued blessing on your JDRF Ride. I cannot believe that August 8 marks the 27th anniversary of my 34 year old sister's death due to Juvenile Diabetes. Our baby sister, who is a JD survivor, is doing well due to the research. God bless your journey.
Mary Ellen

You never know who's life you are going to impact when you participate in a JDRF ride. Thank you Mary Ellen for your words of support and your financial contribution. We will keep riding, for our son, for your sisters, and for the millions of people with Type 1, until we find a cure.

Ride on and God bless.
Posted by Tom Scheidel at 12:24 PM No comments:

When I last posted less then a week ago I was whining about not getting enough miles in. That changed quickly. Since Tuesday of last week I've logged 85 miles. That's what I need to be doing this time of year. I rode three times and each ride was different.

On July 29 Mary and I did a leisurely ride up the White Pine Trail to Rockford. We stopped by the dam to listen to some of the Blues by the River music, but it wasn't doing it for us, so we moved on. We ended up with just over 15 miles.

Last Friday I went out for a solo ride, intending to do about 20 miles. I ended up with 30 due to road conditions. I started out on a route I've done before, heading west through Belmont and up Post Drive. I then take 9 Mile until I feel like turning north. The route loops around Rockford without going through the city. This time I went north on Division, east on Fonger, and then north on Algoma. I planned on turning east again on 12 Mile, but the road had just been chip sealed. There was probably 2 inches on loose gravel on the road surface. I would have had a hard time getting thru that on my mountain bike. So I rode up to 13 Mile and continued east past Northland Drive with the intention on turning south toward home on Courtland. Wrong. The chip seal folks had hit that street as well. Even more loose gravel. So I continued east, getting farther from home with every pedal stroke. I finally turned south on Shaner. When I got to 11 Mile there was a sign that said 10 Mile (the next road I was planning on taking) was closed to the east. No problem, since I would be turning west. However when I got to 10 Mile I realized that the sign should have read "10 Mile Road is gone." The whole road was torn up and being readied for new pavement. I really didn't want to back track and fortunately the dirt where the road used to be was pretty hard packed. So I rode about a mile and a half of dirt road on my skinny tires before getting to the non chip sealed potion of Courtland. There I turned south again before riding past Rockford High School and finally home. My 20 mile ride had turned into a 30 mile adventure.


Yesterday we had a team ride out in Holland. The annual "Tour de Taco" from Coach Mike Clark's house. There was a 25 mile loop in the morning which we didn't do. Our group did a 40 mile loop that left around noon. The route basically followed parts of the Holland Hundred through Fennville, around Hutchin's Lake and Douglas/Saugatuck. It was a beautiful day to ride and we kept up a pretty good pace for a team ride, a 14.5 mile per hour average. The best part was the cookout at the end. Grilled chicken tacos with all the fixin's, plus chips, salsa and cupcakes. That was also my longest ride of the year so far and I felt pretty good at the end of it. That's a very encouraging sign.
Posted by Tom Scheidel at 11:50 AM No comments: