We have been spending Memorial Day weekend with our friends the Hayes' for 29 years. We've been camping, spent time in Chicago and Grand Rapids, and also at their cottage on Lake Paw Paw. The lake is near Watervliet in southwestern Michigan. It's a great place to ride bikes. Lots of fairly flat country roads that lead to quaint beach towns along Lake Michigan. This year's ride took us from the cottage, through blooming blueberry fields to the north side of Benton Harbor. We rode around a golf course that had just hosted a senior PGA event. The golf tournament finished Sunday and we didn't ride by until Monday. So the golfers and spectators were all gone, but the camera platform, fences, and grand stands were still there. It was an easy ride without all the golf commotion, but would have been interesting to ride through as well. On the way back to the cottage we had a bit of a tail wind which made the last of our 36 mile round trip a bit easier. It turned out being my longest ride of the year so far and gives me over 200 total miles. That's not a lot but with spring finally here I should be able to start getting more miles in,
Posted by Tom Scheidel at 9:37 PM No comments:

Going back to the valley

I am really looking forward to riding in Death Valley again this year. Don't get me wrong, the last two rides have been great. Lake Tahoe was probably the most beautiful bike ride I've ever been on and riding the Natchez Trace in Tennessee last year was a blast until I crashed. But there's just something about being in the desert that gets into your blood. Maybe it's because that was where my first JDRF ride was ten years ago. Maybe it's because of the adult summer camp vibe of the place. Maybe it's the stark beauty of an area that is so unlike Michigan. Whatever the reason I'm counting the days (and the miles) until I get to go back.


Our last ride in DV was in 2011. It was very hot. In fact it was so hot that the organizers changed the route. Instead of riding 52 miles into the desert and climbing Jubilee Pass before turning around we rode out 25 miles and turned around. To get the full century you needed to complete the route twice. They didn't want anyone having a medical situation too far away from the starting line at Furnace Creek. That was good thinking. Some of the 350 people there completed the full 100 miles, but most took the weather advisories to heart and shortened their routes. Mary did 50 miles in 2011 and Ian an I did 73. One of the advantages of an out and back route is that at any point you're halfway done.

But the heat and the changed route were not the most memorable part of the 2011 ride in Death Valley. That honor belongs to our team mates Cliff and Nicole for getting engaged at 25 miles into the ride. Cliff planned the whole thing out and let the team know so we were all there when he got down on one knee in the desert. Nicole cut a hole in her cycling glove so her new ring would show through. I don't know if 2014 will give us anything that exciting, but Death Valley has yet to let us leave without awe inspiring stories to bring back.
Posted by Tom Scheidel at 10:47 AM No comments:

A beautiful evening for a ride

It looks like the weather has FINALLY turned springlike. Mary and I took advantage of a warm May evening last night to do a little 17 mile ride. We rode out past Rockford High School and then on past Luton Park. We then took 10 Mile out to Young and that south to 9 Mile. We then turned south again on Blakely before turning west on 7 Mile and getting to finish our ride by going down 7 Mile hill. Mary commented that when we get in better shape we'll need to ride up that hill. She was actually doing quite well on the hill climbs last night. We had almost 650 feet of climbing along the route and she stayed with me for most of it. I'm looking forward to getting a lot of miules in over the next few weeks and months.
Posted by Tom Scheidel at 9:35 PM No comments:

Best week so far this season

Yesterday felt great. Once I was done with the obligatory Mother's Day festivities; making breakfast for Mary, calling my Mom, and going to the in-laws; I headed out for my most difficult ride of the year. The funny thing is, I felt great doing it. 26 miles with almost 900 feet of climbing. Most of the routes I've done this year have been pretty flat and only one was longer. But I felt really good on the bike yesterday. Even with a very hilly course my average speed was 14.8 miles per hour. That's almost 2 mph better than I've been doing so far. It probably has something to do with starting to get back into shape (although I'm not there yet). Last Sunday we did a 30 mile team ride (see the post below). Then on Thursday Mary and I rode up to Rockford and got a  couple hot dogs at the Corner Bar. That was a 17 mile round trip. Then yesterday I rode 26 miles. That's a total of 73 miles in eight days. Not exactly record setting, but a pretty good total for this time of year. 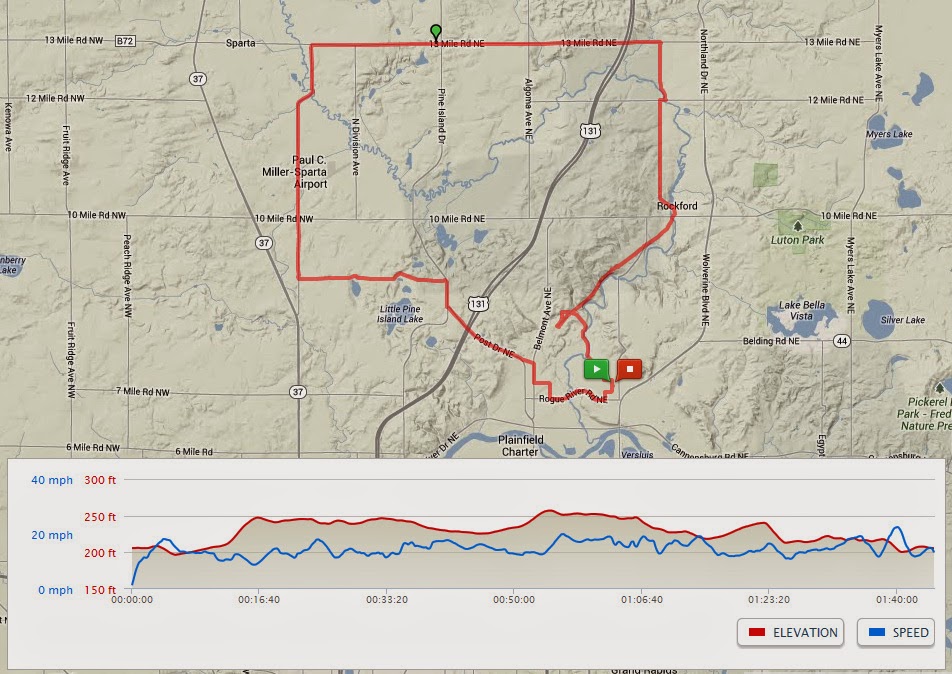 Yesterday's route took me up Post Drive, which is a pretty significant climb near the start. Then I took 9 Mile Road out to Alpine Avenue and went north to near Sparta then turning east on 13 Mile Road. Every time I made a turn it seems like I was facing another climb. That's probably because until I got a couple of miles down 13 Mile I was going up. That was about the halfway point of the ride. After that there was only one more significant climb as I rolled into Rockford via Summit Avenue and then took the White Pine Trail home. The map of my route is on the left and you can click here for all the route details, if you're the sort of person who likes that kind of thing.
Posted by Tom Scheidel at 5:01 PM No comments:

Another team ride, another mileage marker

It has been slow going for me this riding reason. Between injury recovery and pretty crappy weather I haven't put a lot of miles in yet. On Sunday we had a team ride that left from Ada Park and traveled to Saranac. This is a pretty flat route. The first half is the same route that the Rapid Wheelmen Bicycle Club uses for their weekly time trials. There were 10 of us riding in the high winds yesterday and we finished with 30 miles under our tires. Thanks to the mostly westerly wind the ride out was very zippy, we probably averaged about 20 mph. However the way back, into the headwind, was considerably slower. Despite the wind, the 30 miles was the longest ride I've completed this year. I'm feeling better on the bike, but my mental state still isn't back to pre-crash confidence. That will come as I get in more, much needed, mileage.
Posted by Tom Scheidel at 3:06 PM No comments: