This week has been lighter in the number of miles. On Sunday Mary and I went mountain biking in the Nordhouse Dunes area. Great trails and old fire roads. We found our way back to a little lake that was much littler than it was last year. Last year the water level was low, this year it's maybe a quarter of it's previous size. This time next year it might be a meadow. We rode a total of 15 miles and then spent the rest of the day relaxing on the shore of lake Michigan.

Today marks five weeks until we leave for the JDRF ride on Amelia Island. If you have already donated - thank you very much. If you'd still like to donate you can do so by clicking here for Tom or here for Mary. Thank you.
Posted by Tom Scheidel at 10:47 AM No comments:

On Sunday the Juvenile Diabetes Research Foundation cycling team took part in a ride organized by the American Diabetes Foundation. The ADA ride started from downtown Grand Rapids and incorporated their walk. (Side note: The JDRF Walk had been the day before on the opposite side of the Grand River.) The ADA organizers invited our JDRF team to take place in their ride. It was their first ride in this format and I think they were trying to build their numbers. Also, both groups are working to raise money and awareness around diabetes. So it's all good. 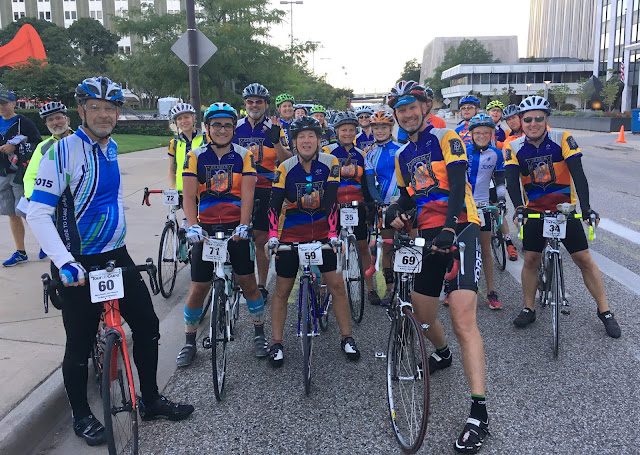 It was a beautiful day to ride, cool in the morning, warn in the afternoon, sunny, and no wind. We started in the shadow of the Calder sculpture. The route took us across the Grand River and toward Millennium Park. The important word in that sentence is "toward". I was on the lead and I thought we were riding "to" Millennium Park. This got us off route about 5 miles into the ride. Luckily we were paralleling the correct route so our detour only added two miles to the overall distance. Later in the day we (I) also missed another road mark and ended up taking the long way around to the second rest stop. I told everyone to stop following me.

We rode all the way to the Hudsonville/Zeeland area. It was a relatively flat ride, only 1,200 feet of climbing and most of that was on two climbs. The route was supposed to a metric century (62 miles) but was actually 67 miles. Or the way our team did it 69.5 miles. We had a good time and it was good to support our sister diabetes organization.

46 days until we ride at Amelia Island.
Posted by Tom Scheidel at 10:24 PM No comments:

Three days, three rides. While I didn't necessarily get a lot of miles in over the long holiday weekend I did ride three times. On Saturday we had a team ride in Hudsonville. Because of the holiday we only had 10 people show up for the ride. Most of the group did the 32 mile loop. Two of us took the shorter option of 25 miles. However the shortcut also had the biggest hill on the route. So we had that going for us.

Mary and I went down to the Hayes cottage on Paw Paw Lake on Saturday evening to spend the rest of the weekend. Instead of doing just one 30+ mile ride like we usually do down there, we opted to do a shorter ride both Sunday and Monday. On Monday we started around the lake in a counterclockwise direction, then rode past Little Paw Paw Lake before heading farther west toward the big lake.We rode back through Coloma and finished with an easy 17 miles.

On Monday we rode clockwise around the lake, taking side trips down lots of dead-end roads to check out some very nice cottages. It was a very leisurely ride and we ended up with 13 pleasant miles. The weather on all three days was absolutely perfect for bicycling. Warm, but not hot temperatures, sunny skies, and very little wind. In all I rode 55 miles over the weekend. We also did some boating and had some great food and drink. Another successful summer holiday.
Posted by Tom Scheidel at 6:28 PM No comments: